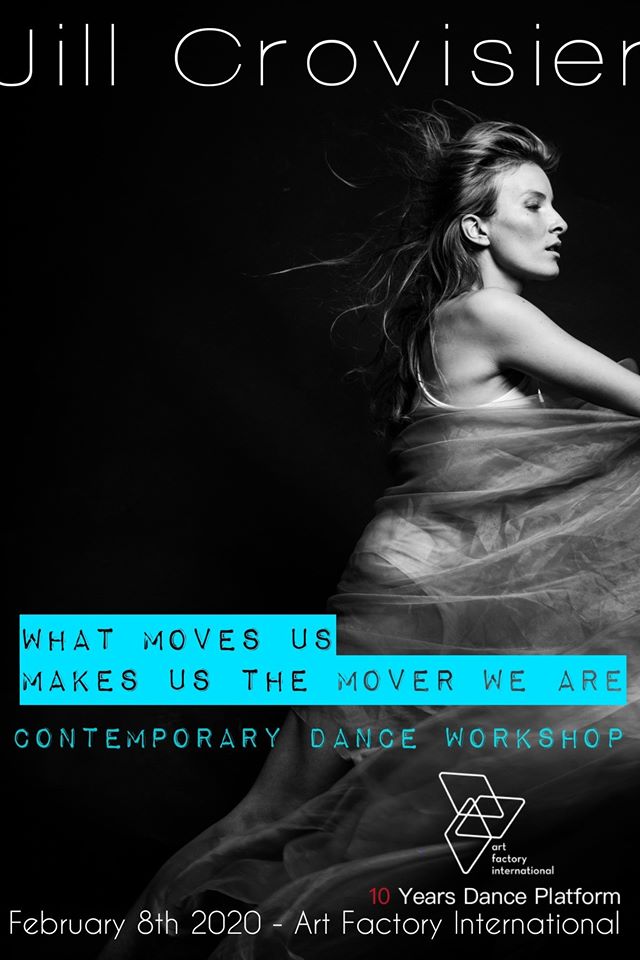 “WHAT MOVES US MAKES US THE MOVER WE ARE”

Having a deep appreciation and passion for the craft of retransmission, the graduate dance teacher Jill Crovisier has been active for the past 10 years offering high quality dance
education and dance therapy workshops around the globe. From young children in distress to professional company dancers, she has the experience to adapt her format of approaching
dance to the participants.

For the workshops designed for non-professional dancers and beginners, Jill offers a dance workshop that allows the participant to get a general approach into dance. It’s a journey of discovery and the connection through a new language of the body and the mind. During the workshop the participant will warm up her/his body, her/his self-awareness in space, her/his connection to music and learn to surpass herself.

The class is based on improvisation, the use of different techniques and structured exercises. Working on the JC
movement, a personalized choreography signature, the workshop allows the dancer to discover some knowledge of it while keeping the importance of individuality. The dancers might learn a short phrase of a JC movement repertoire work depending on the development and personal need of the participants during the workshop.
Jill is convinced that dance should be accessible to everyone and therefore she will be able to adapt her propositions to the level of the participants. It’s not about technique neither about level, it’s about the freedom of expression and the purity of movement.

JILL CROVISIER BIOGRAPHY
Jill graduated in Ballet and Contemporary dance at the Conservatory of music in Esch/Alzette (LU) before joining by selection the China EU Art school in Beijing organized by the British Council of Arts in 2005.
She was a member of the Weis dance people company at the age of 18 and continued to study dance later on in France (where she also obtained a dance teacher degree), NYC, Israel and Indonesia. As a dancer, Jill worked, among other,s for Oz Mulay (ISL), Anu Sistonen (FIN), Pia Vinson (USA), Elisabeth Schilling (DE), Sarah Baltzinger (FR), Kendra J.Horsburgh (UK). Choreography: Jill created R!CE, We are We, Zement, Zement the solo, The Hidden Garden, SIEBEN and the children’s piece MATKA.

Since 2013 Jill has also been working in the production of short dance films and since 2015 she is involved in dance therapy projects. She is the artistic director of the JC movement
production, based in Luxembourg. In 2017 Jill got selected with Zement, the solo at Lucky Trimmer, Gdanski solo dance competition, at the Hannover Choreographic Competition,
won the Frankfurt edition prize of “Solocoreografico” competition and won the CICC Taiwan production award at the Copenhagen International Choreography Competition. In 2018 she premiered SIEBEN, her first major work presented at le Grand Théâtre de La Ville de Luxembourg.
In January 2019 Jill has received an honorary award from the city of Rumelange, for her exceptional achievements as a dancer and choreographer. Her most recent short dance film D A N S is part of the Loop exhibition in Rotondes, Luxembourg next to renowned video artists.
In March 2019 Jill participates at the 23 Internationales Solo Tanz Theater Festival Stuttgart with the short male version of The Hidden Garden. The Hidden Garden, selected by the Theater Federation, will be represented at the Festival Avignon OFF 2020. Her short film NILYNDA won the PEARLS award at POOL Internationale TanzFilmPLattform Berlin. In June 2019, Jill has received the Lëtzebuerger Danzpräis / Luxembourgish Dance
Award. Recently Jill got invited to create a choreography in 2020 for the Folkwang Universität der Künste, Institut für Zeitgenössischen Tanz in Essen.

HOW TO APPLY OF HAVE INFO?
send email to: artfactoryinternational@gmail.com